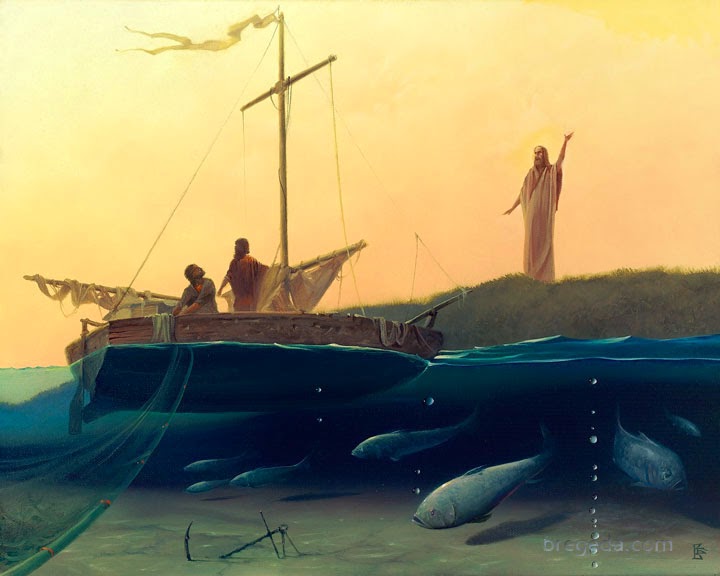 by Anne-Catherine Avril, nds
The theme of this Sunday could be either call or conversion, or call and conversion. In the Gospel, we see Jesus humbly slipping into the footsteps of John the Baptist and announcing the nearness of the Kingdom, which is he himself, and the urgency of conversion.

Conversion, Greek metanoia, means a change of mind, a change in one’s way of seeing things. This is what is asked of the apostles when Jesus calls them. They must transform their way of possessing, since they leave their livelihood, the boat and the nets; their way of loving, since they leave not only their boat but their father; their way of living their freedom, since they surrender their life into the hands of another; they follow Jesus without knowing very well where that will lead them.In the first reading, we hear about Jonah’s adventure in preaching to Nineveh. After trying to escape this call, the prophet decides to obey the voice of God, and he does not proclaim the destruction of Nineveh but rather the city’s upheaval, one might say its chaos. For the Hebrew verb does not mean to destroy but to transform, to change something to its contrary. And that is what will happen. Without hesitation, the Ninevites will transform their way of living. They will fast, they will cry to the Lord, but above all, they will change their attitude, they will convert in the sense of biblical teshuvah: to turn away from their bad behaviour so as to return to God. The Mishnah teaches: “It is not said that God saw their fasting, but that God saw that they turned away from their bad behaviour.” And the biblical text adds: “and from the violence that was in their hands”. Based on this, Jewish tradition says that they were thieves and that they returned everything they had stolen, even to the point of destroying their house if there were stolen stones in its foundations.

And God repented, with the beautiful Hebrew verb from which came the word nehama: consolation, with a connotation of appeasement, of return to a previous positive situation. God is capable of teshuvah, of returning from God’s own decisions as soon as God sees our goodwill expressed in deeds. It is also said in Jewish tradition (and I am paraphrasing): “Even if you open your heart as little as the opening of the eye of a needle, I shall rush in with my mercy.”

Someone said: Forgiveness is God’s repentance, or also God’s weakness.

We can add that the liturgy for the afternoon of Yom Kippur includes the reading of the Book of Jonah: These good pagans who were capable of conversion are given to the Jewish people as a good example. And in the Gospel according to Luke, Jesus does the same with his contemporaries (Luke 11:32). It must be said that the Book of Jonah is a theological tale that was certainly written after the exile in reaction to certain milieus that had difficulty in accepting the pagan world.

In view of the urgency that is felt, the second reading invites us not to become attached to joy or to suffering, to possessions or to the lack of possessions; to change our way of giving value to the things that pass, which does not mean to despise them… Perhaps, on the contrary, it is the way to give them their eternal value.

In Jewish tradition, the commentary on the Psalm speaks precisely of the conversion of the heart. The Lord is right, he is good, he who shows sinners the way: How is the Lord just and good? By showing sinners the way of teshuvah.

To conclude: Let us be converted, the kingdom is near: a nearness of the heart (it is within us); a nearness in space (do we not perceive it, there next to us, in the events, in our neighbor…); a nearness in time (for it never ceases to come and to grow).