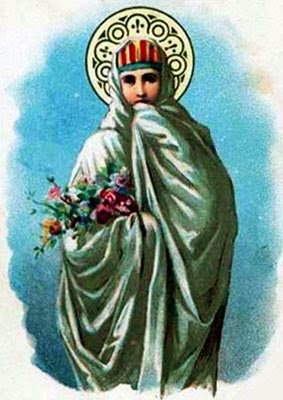 Feast
day: 9th April
Patron
saint: for Muslims converting to Christianity
St.
Casilda was the daughter of a Muslim leader in Toledo, Spain, in the 10th
century. Casilda was herself raised as a Muslim and showed special kindness to
Christian prisoners by frequently sneaking bread into the prison, hidden in her
clothes, to feed them.  Once, she was
stopped by Muslim soldiers and asked to reveal what she was carrying in her
skirt. When she began to show them, the bread turned into a bouquet of roses.
She
became ill as a young woman but was not convinced that any of the local Arab
doctors could cure her. So, she made a pilgrimage to the shrine of San Vicenzo
in northern Spain. Like so many other people who made their way there—many of
them suffering from haemorrhages – Casilda sought the healing waters of the
shrine. We’re uncertain what brought her to the shrine, but we do know that she
left it relieved of illness.
In
response, she became a Christian and lived a life of solitude and penance not
far from the miraculous spring. It’s said that she lived to be 100 years old.
Her death likely occurred around the year 1050.
Tensions
between Muslims and Christians have often existed throughout history, sometimes
resulting in bloody conflict. Through her quiet, simple life Casilda served her
Creator—first in one faith, then another.